Very hard to find Dutch “Stoottroepen” helmet. It is an American M1 helmet with front seam and fixed bales. Meaning the stainless steel rim closes at the fron and that the hooks for the chinstraps cannot move. In very good condition with its original finish very well preserved. Issued with Lt Bar and Follow Me bar and its original chinstraps. After the liberation of the South of Holland it was issued to the newly formed “Stoottroepen” and painted with the orange lion. After the liberation of the South of Holland in 1944 the “stoottroepen” were formed. They used all materials at hand such as blue overalls, Dutch M34 helmets and German weapons. In general troops from “Noord Brabant” were assigned to the British and troops from “Limburg” to the Americans. The received some gear, so it is probable that this helmet was issued to one of the troops from “Limburg”. The name of the owner is written in the liner. A very nice Westinghouse liner in good condition and complete. Only missing the leather chinstrap. Rare helmet, even more so in this condition! 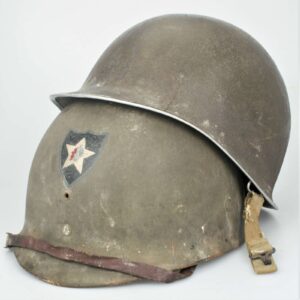 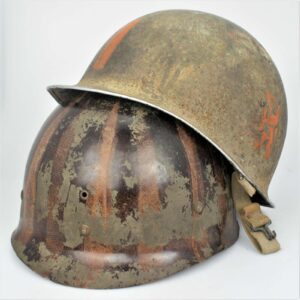